Solar panels on the Loughborough Estate

I’m sure many of you have heard about the solar panels that were installed on the roofs of Loughborough Estate. Although you can’t see them from the ground, several blocks on the Estate have solar panels on the roofs soaking up the sun and creating energy, which is in turn sold to the national grid.

In March 2012, the Brixton Energy Solar 1 installed several hundred square metres of solar panels on the roof of Elmore house in the Loughborough Estate.

In October 2012, the Brixton Energy Solar 2 project installed five sets of solar panels on the roofs of the Styles Gardens apartment blocks. Together with other environmental works undertaken by Lambeth Council and United Residents Housing, these blocks are probably the most energy efficient social housing blocks in South London.

One of the keys is that in urban areas, there are many people who don’t ‘own’ their own roofs, but would like to be able to invest in renewable energy and make a dent into the monopoly of the Big Six energy companies.

Both these projects were set up as community co-operatives and the necessary funds were raised from local people who wanted to invest in a local project. All investors become members and receive an annual return. Money is also set aside to train and give paid internships to young people from the estate. A percentage of the profits goes into energy efficient education and a fund has been set up to pay for initiatives that help tackle fuel poverty eg: providing guidance to local people on the simple changes they can make to reduce their energy bills, for example, draught

proofing their homes and switching to different energy tariffs that match their energy usage. There are also workshop where people can learn how to make their own solar panel.

Find out more about these and future projects in and around Loughborough Junction and Brixton. 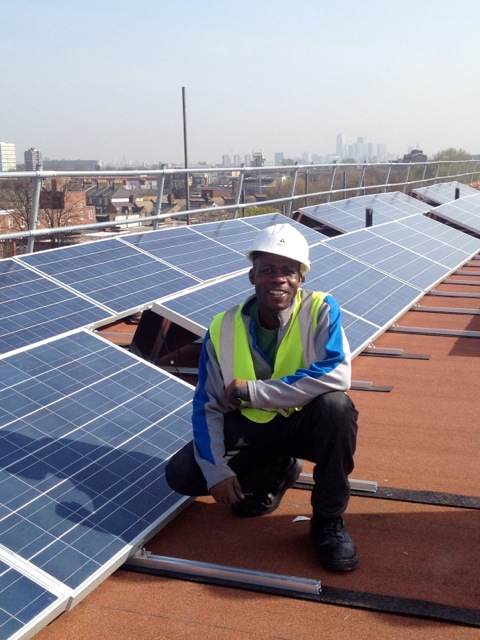 Installing the solar panels – while the sun was shining