After all of last weeks promoting and effort to get this shot, a substantial crowd gathered for the event and really helped make history on Southwell Road, Loughborough Junction. Not one to miss a trick, Conor filmed the event and published it on YouTube. We await to see the final photo……

Thank you to everyone that helped make this shot possible!

The Clockwork Studios are hidden away on Southwell Road, a quiet and elegant street which runs parallel with Coldharbour lane, there are some extraordinary buildings along the road, but none more prominent than the Clockwork Studios which towers proudly above its neighbours.  Located at 38 Southwell Road, the studios are home to a busy and energetic team of private artisans, who twice yearly open their doors to the public.

The studios next Open Weekend runs from the 5th – 7th December, and you are invited to browse, discuss and buy the latest designs.

As a centenary event, Conor Masterson has proposed to shoot an extraordinary image celebrating the work and productions of Fred Karno at “The Fun Factory” as it was then known. Conor is a professional photographer and resident of Southwell Road, he is also a enthusiastic and out spoken community member and Co-secretary of the Loughborough Junction Action group. LJAG. 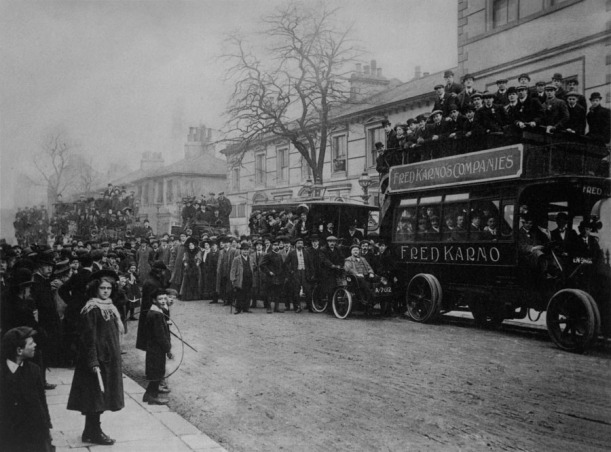 Fred Karno - The Fun Factory centinery photograph - You are invited to help recreate this photograph at 11.15am on Sunday the 7th of December 2008

“I first saw a copy of it when I visited the Clockwork Studios and was being shown around almost 4 years ago by Noel, the landlord and ‘magician’ behind the studios. He showed me a series of black and white photocopies he had framed telling the story of ‘The Fun Factory’. These old photographs showed the house as it was in 1907 as well as behind the scenes images of the factory at work. At his peak Fred Karno was producing many different productions of his companies performances throughout the country and the world. The sets were built in the back yard, the trapeze artists practiced in the tall three story building and with a little imagination you can picture the slapstick routines, typical of Vaudeville, being worked out in and around the rehearsal rooms.”

Conor will be recreating the photograph  outside the ‘Fun Factory’ in 1907 celebrating the fact that the area and indeed the Clockwork Studios is still a vibrant creative community.The plan is to shoot the image at 11.15am on Sunday the 7th of December 2008. You are invited to help recreate this superb photograph 101 years on. Following this, at midday, The Clockwork Studios will be open for its Christmas ‘Open Day Studios’.

Essential Dates for your diary

I really like the photograph of the green man pub but I think the time has come for a fresher look as we turn the corner into Autumn. If anyone has an image that might be suitable for the blog then please send it to loughboroughjunction@yahoo.com – It doesn’t matter when you took it, it just has to be interesting, relative and good quality. 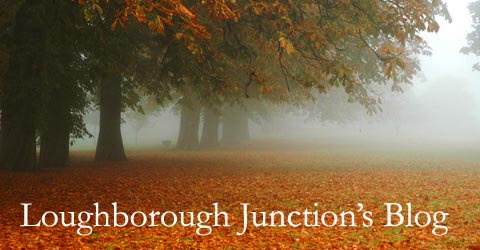